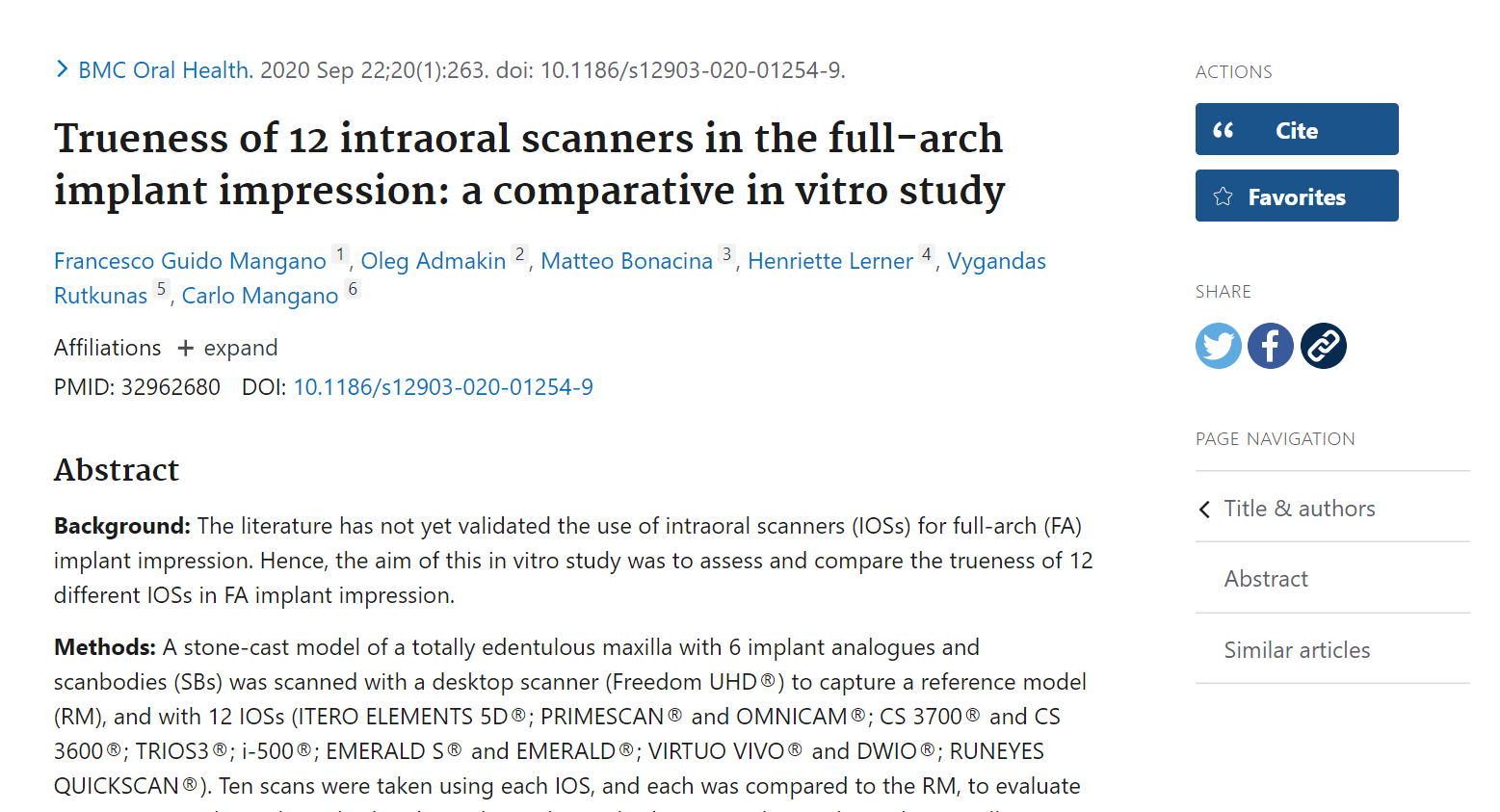 Finally an independent study comparing the latest intraoral scanners on the market has been released.

Dentists, technicians, specialists and the industry as a whole, has been desperate for an independent study like this. Now we have it. Although it does have some limitations, it certainly brings up some interesting points.

Although other studies comparing scanners have been released in the past, these were often released by the companies themselves (obvious conflict of interest there). Furthermore, the previous studies usually had none of the major competitors involved or the study was in some way funded through an educational institution but via a grant from said company.

This independent and unbiased study by Francesco Guido Mangano and his team is an amazing piece of published literature. To read the full publication click here.

Unbiased, peer-reviewed research is critical to push innovation and hold every player in the market accountable. Having empirical data like this can only encourage companies to do better with their future products.

We have summarized the study below for your convenience.

This study was based on a full arch implant scan of scan bodies using 2 different methods of analysis (mesh and nurbs). A stone-cast model of a totally edentulous maxilla with 6 implant analogues and scanbodies was scanned with a desktop scanner (Freedom UHD) to capture a reference model. Ten scans were taken using each IOS, and each was compared to the reference model, to evaluate trueness.

Statistically significant differences emerged in the accuracy between different intraoral scanners, and some may be more suitable for optical impressions for the manufacture of implant-supported long-span restorations such as full arch implant restorations.

Intraoral scanner accuracy for the mesh/mesh (STL files) comparison is as follows:

Intraoral scanner accuracy for the nurbs/nurbs (scanbody positions in space) comparison is as follows:

We have an unbiased intraoral scanner study, now what?

As with all scientific literature we have to be careful not to make hasty conclusions from a single study. In saying that, this paper certainly raises some interesting questions and will hopefully lead to more studies of this nature.

As the authors say "although scrupulously conducted, and although it is not possible to determine the trueness of an IOS in vivo, an in vitro study cannot exactly reproduce the characteristics present in the patient’s mouth (conditions of light, humidity, saliva). The scanning of plaster models is certainly easier than an intraoral scan, which has limits of space".

The obvious limitation here is that it is an in-vitro study. Although the actual measurements are reliable, in an actual patient in a clinical setting the results maybe different. Additionally trueness (or accuracy) is just one parameter of a scanner's performance clinically.

This is important to keep in mind as how these scanners actually behave in the mouth may be a lot different than on lab bench. Not in a good way either - these scanners need to be engineered with moisture control, light interaction, and the generally harsh environment of the mouth in mind. These results may also not be directly relatable to movable tissue as these were done on static models. There is also some contention with the type of scan body used in this study.

Here at the Institute of Digital Dentistry we have reviewed many of these scanners from a clinical perspective. This includes many scanners tested in this study such as the TRIOS 3, CEREC Omnicam, TRIOS 4 and Medit i500. It is great to have empirical data to back up our impressions of these scanners.

Thanks to Francesco Guido Mangano and his team for the enormous amount of effort it would have taken to collate, analyze and publish this data. On top of all of this, they have provided it for free for everyone.

They say it best in their concluding statement "it is important to remember that other factors are important in determining the reliability of an optical impression, including the operator, patient, environmental conditions and scanbodies. Further studies are therefore necessary to understand the weight of each factor in determining the final error in the optical impression."

Read more of our popular CAD/CAM articles and blogs below:

iTero Element 5D Plus Review – the Fastest iTero Scanner Yet!

Sign up below to receive updates on our next digital dentistry articles and CAD/CAM Reviews!